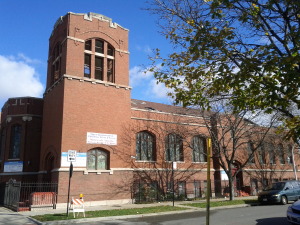 The “First Congregational Church of Chicago” was established in 1851 when forty eight members of the Third Presbyterian Church broke membership with it because of feelings “against the sin of slavery” and united to create a new church. This group had a great sense of responsibility toward the fellow man hence its history contains a rich record in social action.

Its founder, Philo Carpenter, who came to Chicago in 1832, was the first apothecary in Chicago and a very prominent person in the city’s history for his participation in Chicago’s first Board of education, for being one of the founders of Chicago’s Theological Seminary and one of the persons who helped in the formation of the First Presbyterian Church in 1833 and the Third Presbyterian Church in 1847.

Looking at history in the 1800’s, in the slavery years, the Church served as a sanctuary that received and protected slaves when they were secretly taken to their freedom.  In the 1870’s its building was used to provide offices for Chicago’s City Hall after the Great Fire. At the same time, the building and its members provide food, clothes and room for the fire’s victims who had lost everything. During Civil War time, the Church’s pastor served in a special embassy with President Lincoln, which is thought that helped the process towards the Emancipation Proclamation.

Chicago’s First Congregational Church, in its ministry toward and for the fellow man, with a great work spirit, starts founding several missions in other city locations when its population was growing. All of them were created with the purpose of serving others. During 1856-1868 the Church forms six missions, one after the other. Some of these were “Edwards Chapel”, 1856; one that later became “Tabernacle Church”, 1857; “Union Park Church”, 1860; “Bethany Church” and “Leavitt StreetChurch” in 1868. All of these missions grew rapidly with a feeling of “the Church and society”. At the same time these had been formed with a vision towards self-sufficiency and not with a perpetual economic dependency of its mother Church.

In 1911, the Church suffers a fire that severely destroys the temple and unites with the “Union Park” Church, one of its missions, which had greatly grown in membership and had built a cathedral like temple that provided enough space for all its 1380 members. Today that structure is located at the Ashland and Washington corner. It is important to point thatChicago’s First Congregational Church had been victim of two additional fires, one in 1851 and other in 1873, which destroyed its worship temple that had been dedicated in 1870 and had cost $200,000. In interviews with old members of the Church, it was thought that some of these fires were intentional, started by people who opposed the Church’s radical position toward slavery.

When they joined with the “United Park” Church, the members decide to rename it “The New First Congregational Church of Chicago”, for its history. Through the years, two other missions join the congregation; “Leavitt Street Church” in 1917, for changes in the community and membership decline to 132 persons; and “Bethany Church” by the end of the 1920’s, for similar reasons. These changes demonstrate the process inside a city that is growing and the migration of new ethnic groups in the communities surrounding these missions.

In the following years the Church makes a change in its own spirituality, concentrating in its internal program and separating from the radicalism and social services that make the Church be born and develop. Now its focus turns to make the Church a meaningful place in Chicago through eloquent sermons and its music. By 1951, in its centennial anniversary, people inside the Church notice this change and the one of its community, which shows them the need to look again towards the future.

The Church, during these times, faced a new reality in which its community was not only composed of Anglo-Saxons of high economic class like the Dole or Ford families but, little by little, it was filling up with Mexican and Puerto Rican immigrants looking for jobs. Even though these new immigrants were actually looking for a place to live one or two miles south of the Church’s location (Ashland and Washington Blvd.), to the other side of what is today the “Congress Expressway”; many of the Church’s members started moving to the suburbs. Some of them traveled on Sundays for service but, while the composition of the community and Church were transforming from a middle class to a working class, the rest never returned. Today’s and tomorrow’s Church owes them its economic stability because it was them who contributed donations which help maintain the building and ministry.

In 1955, the congregation starts seeing the need to embrace its new community and conversations start inside Church to develop a new ministry inclusive to Hispanics, particularly Puerto Ricans. These conversations cause a lot of tension between those who want to share their ministry with the new immigrants and those who didn’t. Conversations continue for 10 years and during that time, even though some victories were gained for the new community, the Church and its members suffered a lot for the tensions.

In 1957, for some it was a time for new vision, taking into consideration its community. During this time, the Community Renewal Society, an organization created in part by the Church, starts more intentional conversations about the needs that the Puerto Ricans have, economically and for their ministry. Their purpose was strengthen the Christian ministry and the Ministers of the Casa Central Evangelical (that is know today as Casa Central), one of its missions; or better said, attend the basic needs of the people of this mission and its family. The program consisted in providing any kind of social services: housing, job, medical aid, court aid, translators, English courses, help for Public Aid, to “socially integrate” the newly arrived Puerto Ricans.

In May 14, 1961, the Church employs the casa Central Evangelica director, Rev. Rafael V. Martinez, native from Cuba, a Presbyterian Church ordained minister, as associate pastor serving the Hispanic ministry. Summer that year, the Hispanic mission is invited to move from its place in 1671 Ogden Avenue to the Carpenter room, on the first floor of the building next to the Church. At summer time are received, as members of the Church, Rev. Martinez, his wife and Mr. Guillermo Quiceno who worked as the mission’s Associated Minister. On October of that same year, the Church signs a deal with the Community Renewal Society to work together to establish “an effective ministry” that serves the “near west side” population, already an ethnically diverse community. The purpose of this ministry was to “liven religious fraternity between people, serve the fellow man and take the word of God…”

On October of 1961 it is established that the members of the Hispanic community would have their own chapel for adoration services and all the rights and duties as member of the Church.

On November 26, 1961 it is celebrated the welcoming of 53 new Hispanic members to the Church and a new stage in the Church’s life starts. These join 9 previously welcomed by summer, with the Church’s and the Renewal Society’s spirit of “active testimony”. This welcoming is the beginning of what is today Chicago’s First Congregational Church, a Hispanic Church, which today is located in 1305 Hamlin Avenue in Chicago.

In 1963, the Church employs Rev, Jose A. Torres, ordained minister by the United Evangelical Church of Puerto Rico, native to the island, as minister in charge. This year the Church joins the United Church of Christ and adopts a new Constitution, starts new programs with the community, joins the civil rights battle, becomes the center of attention when the black movement brings its leader, Rev. Martin Luther King Jr., to speak at the sanctuary, and joins the Hispanic congregation to worship together in a bilingual adoration service.

With the new changes, the Church starts a new attitude inside its ministry which involves them more directly with social action and launches them in a social and prophetic ministry. Throughout the years, the Church keeps its religious programs and its action callings, gets involved in housing matters, adequate education in the public system, in the unemployment problem, against poverty and hunger, for a better medical attention, etc.

In 1976, for changes in the composition in the community that no longer is Hispanic, the Church makes arrangements to move to the Hispanic community of Humboldt Park. In this process the Church hands its cathedral building to the Community Renewal Society and gets a building at the west side of Humboldt Park. For a few months celebrates its adoration services and does its programs in a store front on Grand Avenue. It then moves to a new building at the Hamlin andPotomac corner.

Always worried for their Church and community, the Church helps found the Puerto Rican Cultural Center – “La Escuelita”, an Alternative High School, as a way of dealing with the high incidence of youth that leave school without graduating. With the help of people from the community the Church opens the door of the Betances Clinic on a Church’s room. This clinic provides free medical attention for the community for some time. Food distribution started for people in need, summer programs and jobs for the youth, tutoring programs for children during school year, it continued the Boy Scouts program – Troop 309 (the oldest troop in Chicago), the program to take children from the city to the Church’s countryside in Michigan and the English and GED classes.

Chicago’s First Congregational Church today is one of 6 Hispanic Churches United in Christ. It serves as center of community life and development for Latin people in Chicago. It has contributed to the development of various pastors and community leaders. In the pastoral leadership that has come out of the Church are: Rev. Jorge L. Morales, Rev. Gilberto Justiniano, Rev. Nidza Lopez and others.

We live the present looking to serve the teachings inherited from our Father, accepting the cost and joy of the discipleship, transforming our lives in the Church, in our homes, in our community and in everything we do while we walk towards the Kingdom of God.

We look to the future knowing we are people in a process of transformation, responsibly sharing our talents with love, serving our fellow man, “because to liberty we have been summoned” (Galatians 5:13).